(Update: With the June 28 primary approaching quickly, Gov. Kathy Hochul still has a commanding lead in odds to win the elections as posted by Ladbrokes.

New Yorkers will go to the polls in the Democrat and Republican primaries to vote on who will be the final two counterparts in the general election for governor. On Nov. 8, the New York Gubernatorial Election will be held to decide the next Governor of New York.

With the primariy quickly approaching and the general not far behind, oddsmakers have betting markets for the race including odds for all the top candidates. Below, you'll find a breakdown of the latest New York Governor odds, as well updates on news that impacts the race.

Latest Odds to be the Next Governor of New York

EDITOR'S NOTE: Political betting is prohibited in New York. The odds discussed above are from regulated bookmakers in the UK, where betting on US politics is legal. 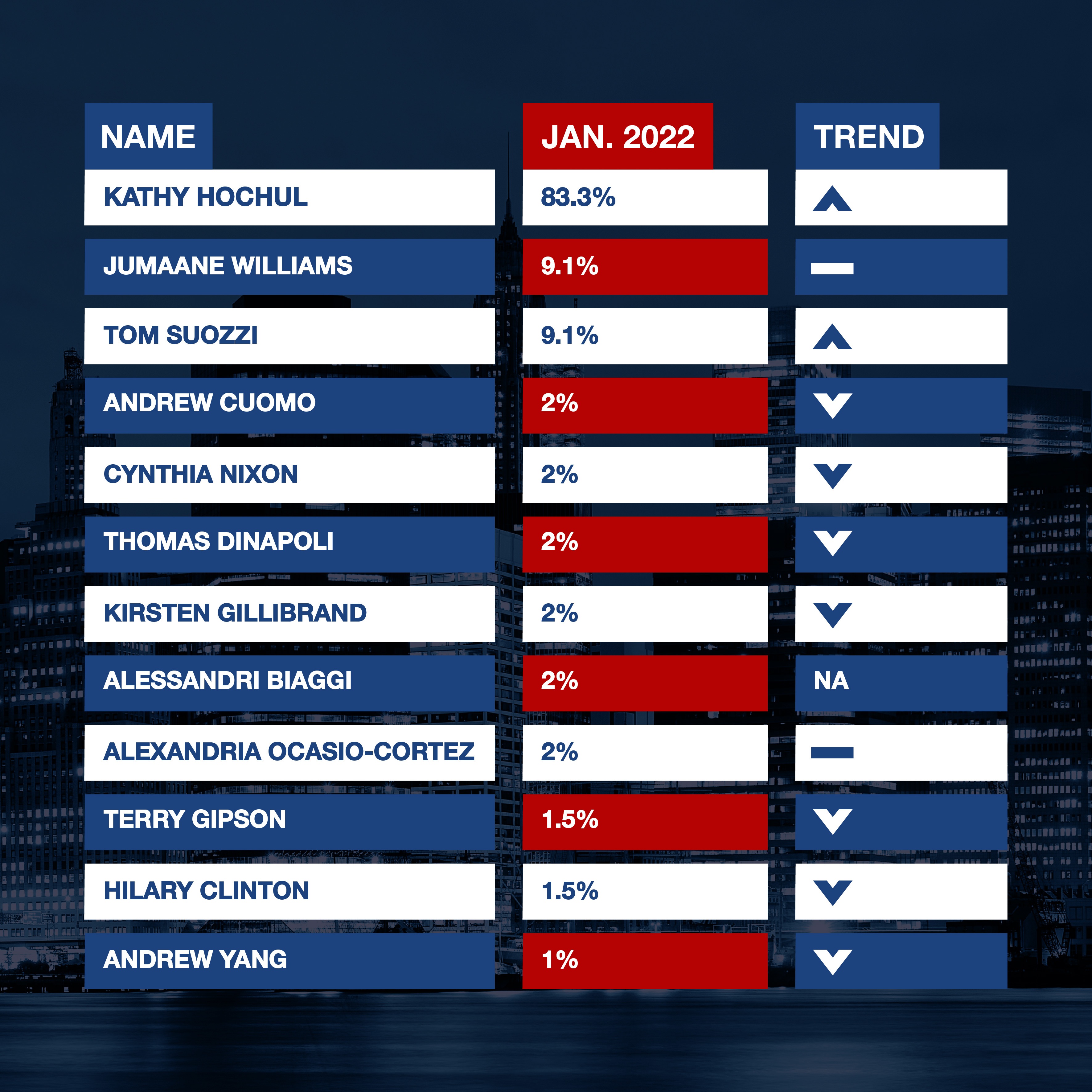 Hochul, who took over after the resignation of Cuomo last August, remains a prohibitive -3300 favorite with England-based Ladbrokes to remain in the position, despite having to recently replace her Lieutenant Governor. Antonio Delgado replaced Brian Benjamin, who was arrested on corruption charges.

Jumanne Williams, New York City’s public advocate, is no longer in second place among Democrats. In second now, at +2000, is Tom Suozzi, a Long Island congressman. Former New York City Mayor Bill de Blasio is next at +5000, even though de Blasio announced on Jan. 18 that he would not be running,

Ladbrokes lists the following familiar names as long shots in the Democratic field:

NewYorkBets.com will update this page when news and change of odds warrant. Ladbrokes has not posted odds on the Republican side but here are some contenders. They have, however, listed a Democrat at -800 favorite to win and a Republican as  a +500 underdog.

Top Candidates for New York Governer at a Glance

Let's take a closer look at each candidate considered a potential contender to be the next Governor of New York.

To vote in New York, an individual must be a United States citizen, a resident of a county, city, or village in the state for at least 30 days before to the election and at least 18 years old by the date of the election. Individuals who are in prison or on parole for a felony conviction and those who have been declared mentally incompetent by a court are ineligible to register to vote. One cannot register to vote in New York while claiming the right to vote elsewhere.

Betting on the Race

Lou Monaco has been a columnist for Gaming Today in Las Vegas and has over 30 years sports experience with previous stints at ESPN SportsTicker, Daily Racing Form and Oddschecker.