Major league sports are a staple of entertainment across the United States, and the growth of various leagues has skyrocketed since the days of the black and white television. Which is why we wanted to take a break from NY sportsbooks to discover which leagues bring in the most supporters and have the fastest-growing market share.

At NewYorkBets, we took it upon ourselves to analyze Google search data from 2004 vs 2022 to see market growth for the teams across that state. That also meant finding which teams have seen a decrease over the years.

So which teams illustrate market growth, and which have seen a drop during this period? You’ll be shocked to see how Google search data for different leagues has changed, and what these odds mean for the future of New York’s major league sports as a whole. 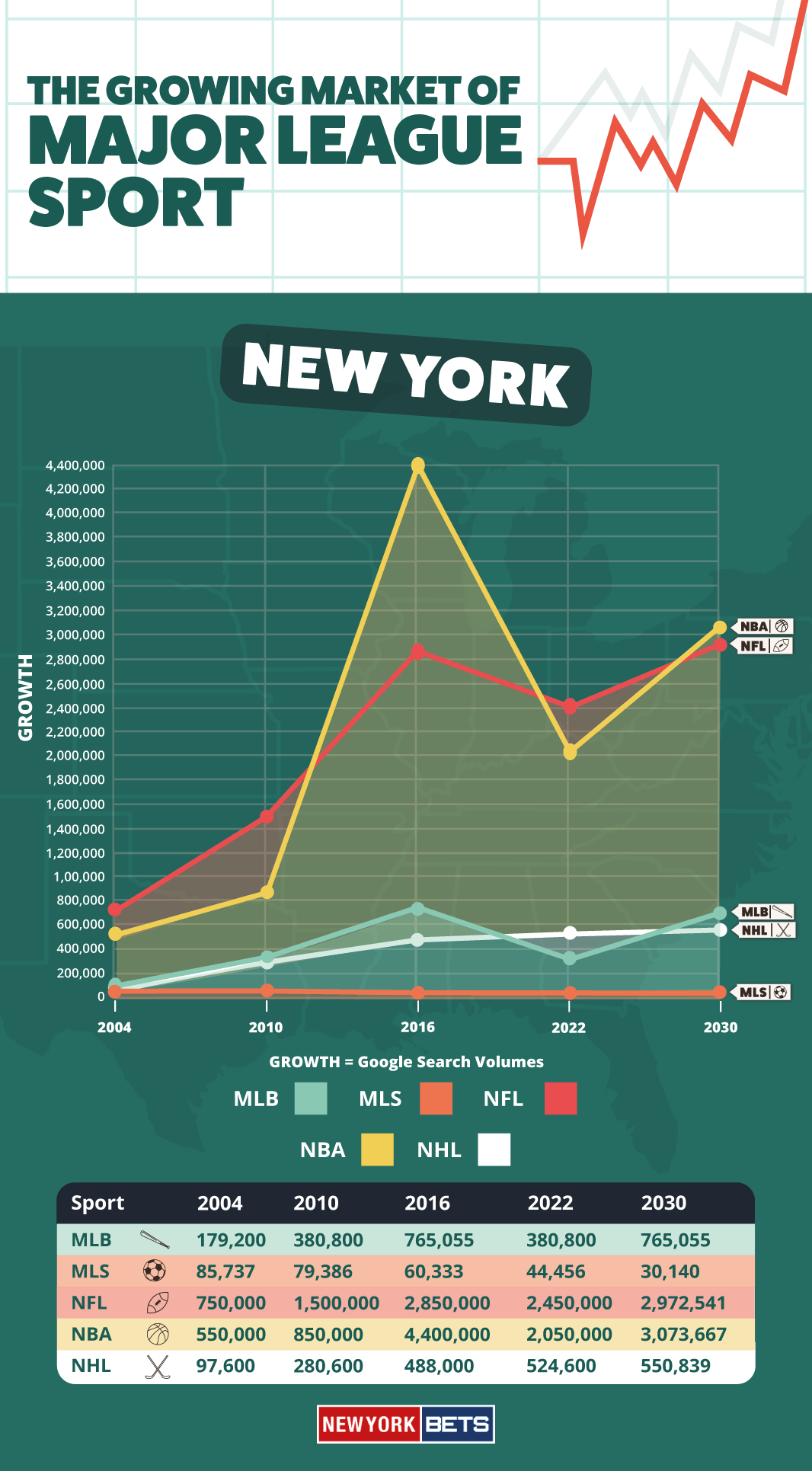 In the last 18 years from 2004 to 2022, the NBA has gained the highest market share, with a massive fan interest of 438% in the Empire State. And this soars above any other major league sport studied.

New York is home to two NBA teams – the Knicks and the Nets, both of which currently sit in the top 7 seeding in the Eastern Conference. So, it’s not surprising this state is bringing in major growth among basketball fans!

However, when considering 2022 vs. 2030 data, chances are there will be a 5% increase in fan interest in this state.

But this is likely because both fan and bettors’ following has increased so rapidly since 2004, so the lower growth isn’t that concerning in comparison to other sports when you consider the overall increase over the years.

And remember to keep it here at NewYorkBets for NY NBA betting sites as the Knicks and Nets make their respective playoff pushes.

NHL To See Significant Growth in New York By 2030

New Yorkers will rejoice, as the NHL is forecasted for great things in future years, and is predicted as one of New York’s biggest growth holder in market share by 2030, with a whopping 131% growth in fan interest by this year (from 2004).

Need to catch up on the Rangers, Sabres and Islanders? NYB is also home to all the best NHL betting sites New York.

From 2022 to 2030, our data helped predict the NFL as a highflyer for market share growth, with a startling 50% increase during this period. Let’s remember, New York is home to the Bills, the Jets and the Giants, meaning it’s almost expected for this league to have a high influence, and pull in a large number of fans.

Plus, the Bills are currently kings of the AFC East, which means inevitably, their current popularity is through the roof.

5 x $100 Second Chance Bets on the NFL Conference Round
Terms apply for all bonuses. Must be 21+ to participate.

MLS Has Ways To Go

In New York, Major League Soccer teams fail to resonate in a meaningful way compared to their counterparts. To make matters worse, it’s expected to decline 21% from 2022 to 2030, even after the men's U.S. team got through the group stages at Qatar’s 2022 World Cup.

Can Mets, Yankees Save MLB In NY?

Considering New York is home to the Mets and the Yankees, this decline is pretty shocking, but perhaps has something to do with the Joe Torre-Derek Jeter led Yanks teams being a thing of the past. Hopefully, we’ll see further wins from each team, as this will improve market growth considerably.

Up to $1,250 on Caesars + WATCH & BET on Select NFL Conference Round Games on the app
Promo Code: NYBETSFULL
Terms apply for all bonuses. Must be 21+ to participate.

This dataset from NewYorkBets.com compares the number of fans for each major sporting league (NFL, NBA, NHL, MLS, MLB) in the state of New York and forecasts their projected growth up to 2030 using search volume and Google trend data.

As search volume data is only accessible back to December 2018, the estimated search volume from January 2004 to November 2018 has to be calculated. Using the trend values as proxies, the equivalent search volume of the largest trend index value accessible could be found as far back as 2004.

If multiple months had the same largest index value, the one with the largest search volume would be used. This allowed for the calculation of the index estimated search volume (IESV) metric.

From there, the “=forecast.ets” function was used to forecast the IESV. This takes into account seasonality, which is necessary, as the sports will have peaks and dips at different times of the year, meaning a linear forecast cannot be used.

This was used to forecast the data to December 2030, using the previously estimated search volume from January 2004 to November 2022.