The Patreon Rich List: Which Creators Earn the Most?

In recent years, we’ve seen a continued shift in popularity towards digital media, with new platforms regularly springing up. One that’s particularly popular at the moment is the subscription service Patreon, a website that allows content creators to earn from their work. But which creators make the most money?

To determine the highest-earning Patreon creators, we gathered up-to-date data from Graphtreon, which reveals the most popular channels and how much they make*. Discover which channels make the cut!

Analyzing and comparing the 20 most popular Patreon creators, it’s interesting to see that the overwhelming majority are podcasters. Incredibly, 15 on the list fall under this category, including the 9 of the top 10, highlighting the content format’s rapid growth in popularity. 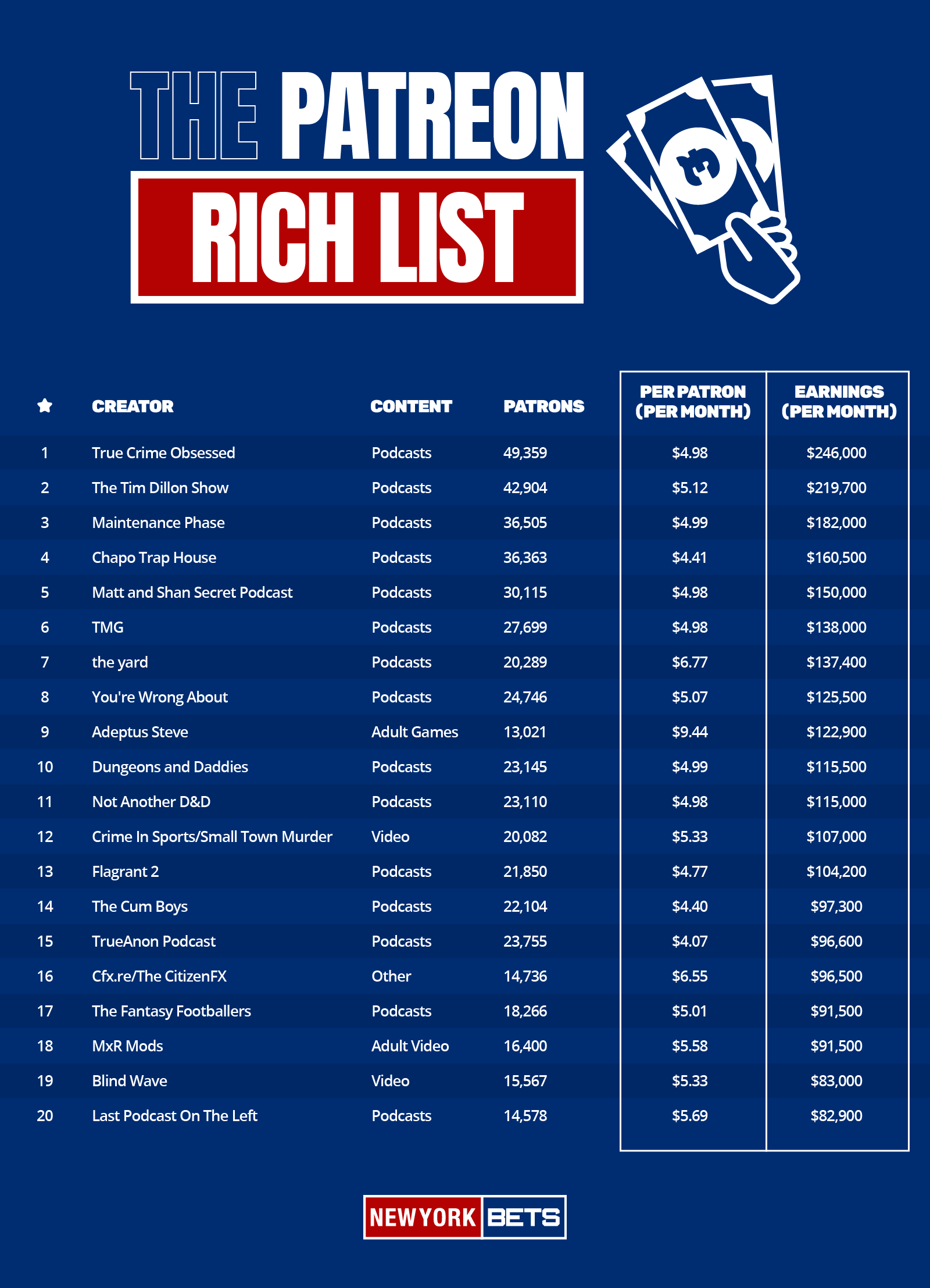 And claiming the crown as the overall highest-earning Patreon channel, we have True Crime Obsessed. The podcast boasts almost 50,000 subscribers who each pay (on average) $4.98 per month for exclusive content, totaling monthly earnings of $246,000 – or almost $3 million annually!

Meanwhile, the highest-earning non-podcast on Patreon is Adeptus Steve, which falls under the category of adult gaming. The channel has over 13,000 followers and earns a whopping $122,900 each month. Other alternative content categories to feature include video, through Crime in Sport/Small Town Murder ($107,000) and Blind Wave ($83,000), and adult video through MxR Mods ($91,500).

The Highest Earnest Creators by Category

We know podcasts dominate when it comes to Patreon earning potential, but how do other types of creators fair, and which gaming, video, music, and photography channels make the most money?

Taking top spot as the highest-earning gaming channel on Patreon, we have Razed. With 14,696 subscribers, the show earns $79,000 monthly. Following, The Glass Cannon earns $62,000 each month, while Nextlander and Saya Akdepsksal earn just short of $50,000. And in fifth, Alex Masse makes $40,700 a month. 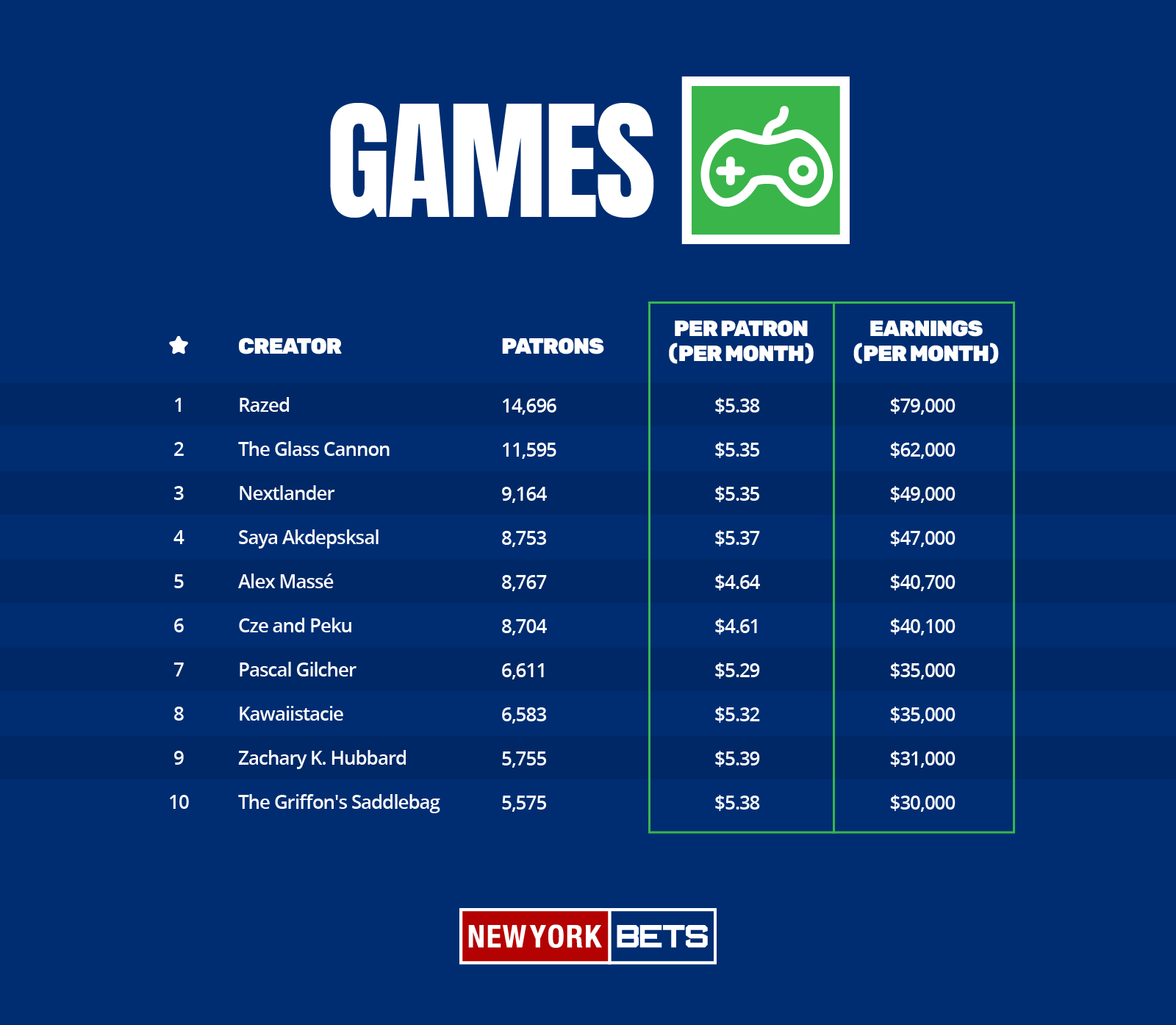 Joining Crime in Sports/Small Town Murder and Blind Wave among Patreon’s highest earning video channels, we have YaBoyRoshi and Kurzgesagt – In a Nutshell, each making over $80,000 each month. 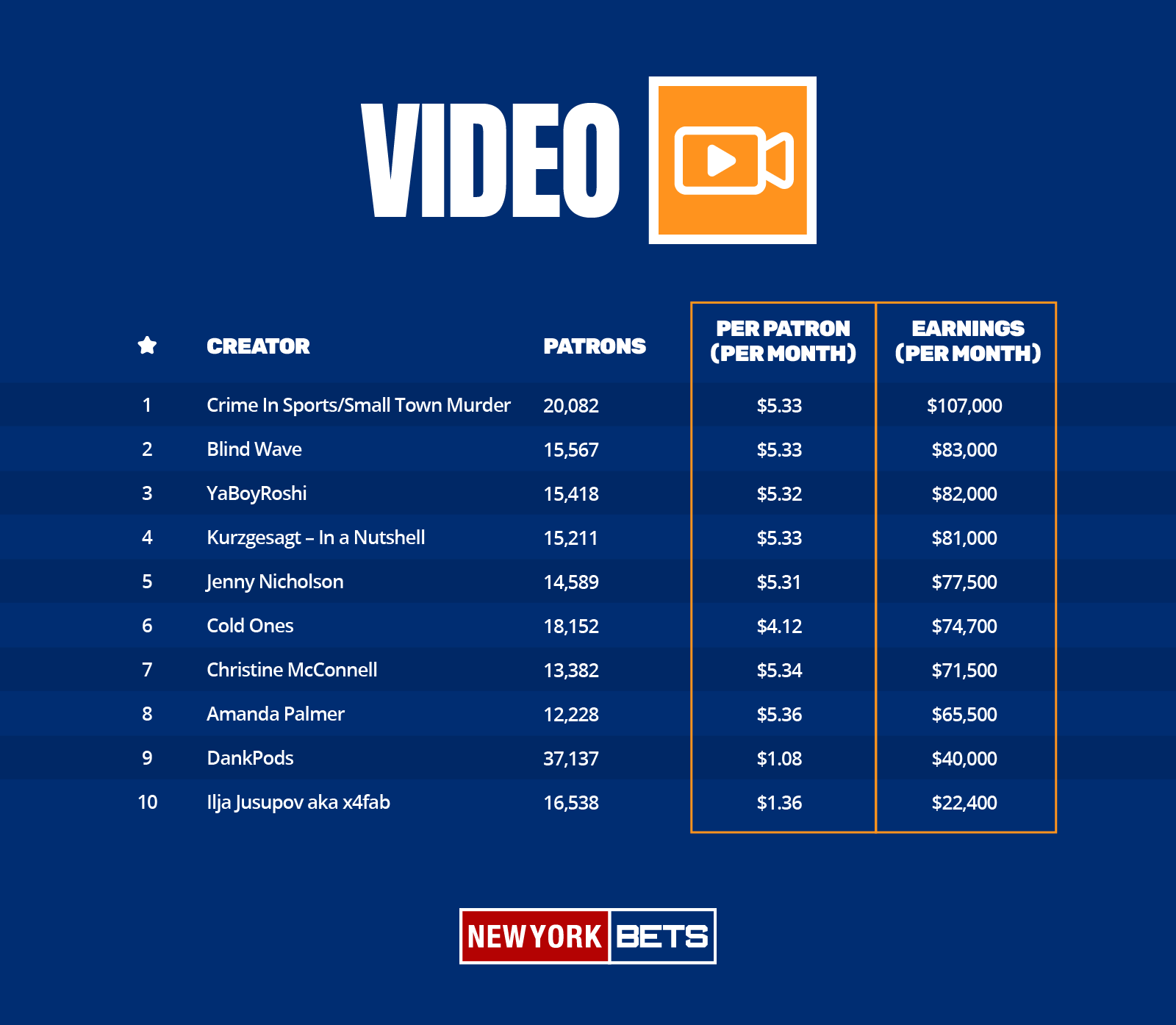 When it comes to Patreon’s music channels, none earn more than Turning the Tables. The creator has 8,482 followers and makes $50,500 each month. Home Free ($45,600) has roughly half the followers, but still manages to place second thanks to the creator’s relatively high follower fee - $10.56 per month. 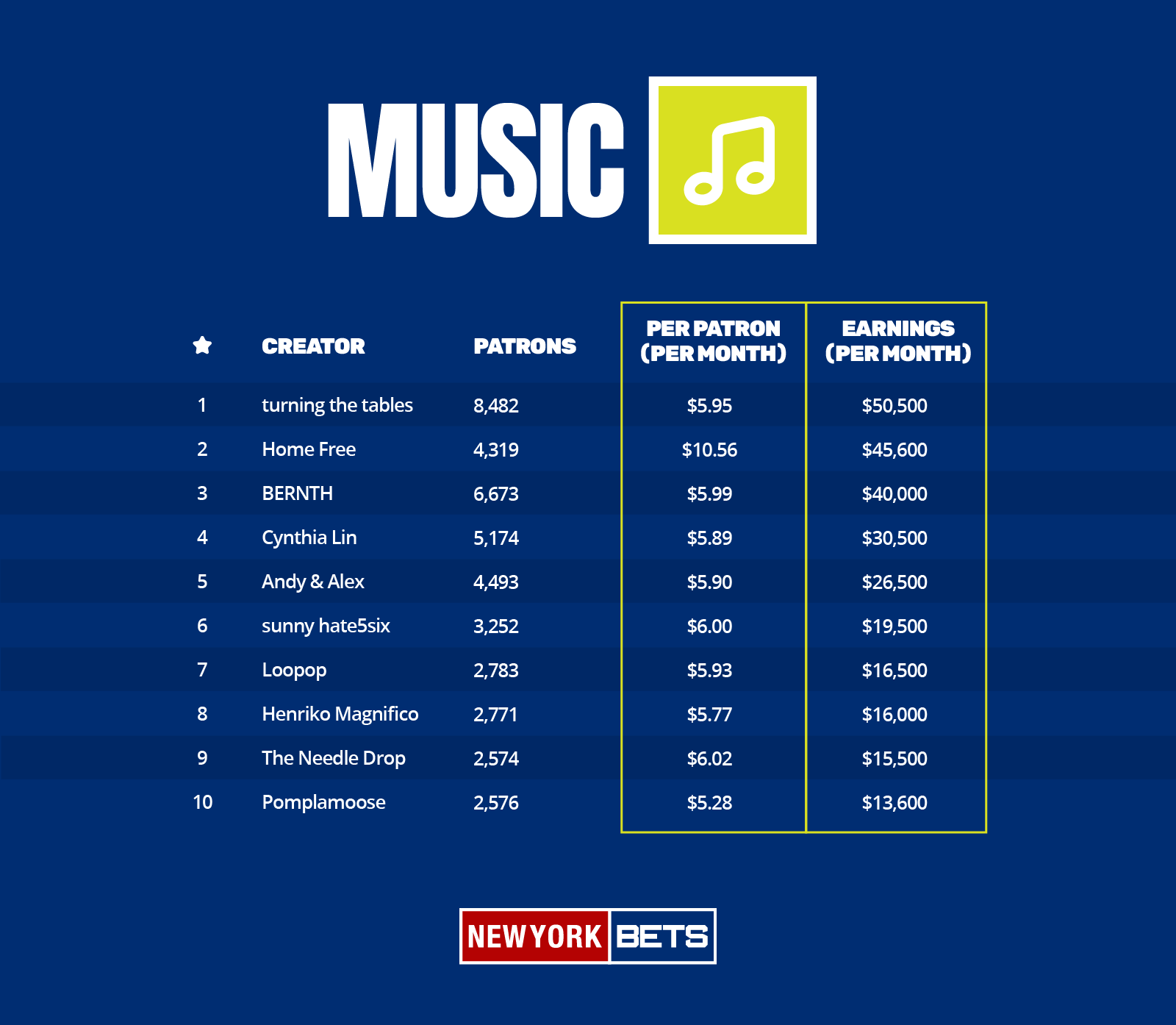 Photography may not be Patreon’s primary category, but that doesn’t mean creators can’t earn serious money through the platform. In fact, creator Goats of Anarchy earns a healthy $33,000 per month. 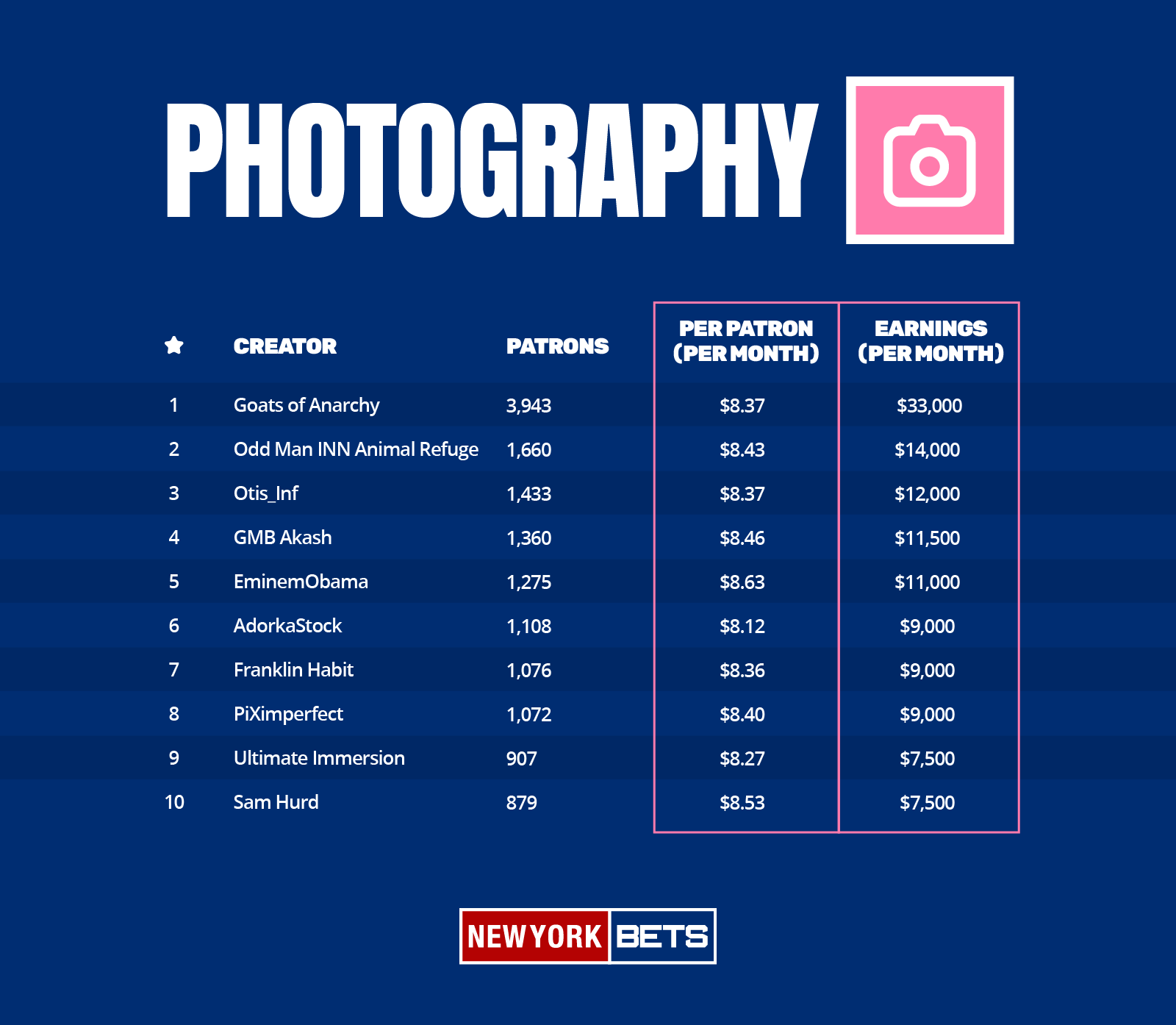 Patreon is considered among the best platforms for content creators, and it’s incredible to see the massive sums the top-earning channels are making each month. For even more interesting insight from our team of experts, check out the latest news in our world, or explore how you might be able to make a little extra money through sports gambling in New York.

Earning figures were captured on April 20, 2022, from https://graphtreon.com/.

*For creators that don’t publish how much money they make each month, we estimated monthly income based on the possible earnings from their different membership levels and total number of followers.

When using this data and research, please attribute by linking to this study and citing Bookies.com.